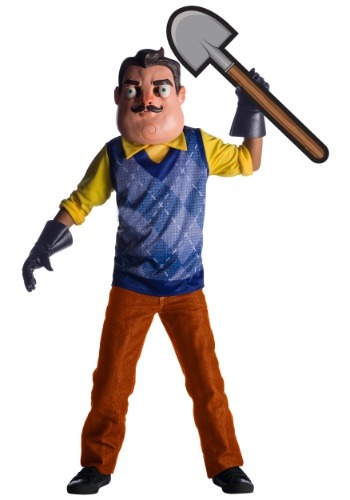 PLAY THE OTHER ROLE

We've seen a ton of different kinds of characters come through the office.  Both heroic folks who are willing to sacrifice themselves in order to save the innocent and the notorious villains who put those folks in danger for one reason or another.  Sometimes, villains are pretty obviously big bads just to be nasty.  Occasionally, they're crazy and really can't help but go down the evil path.  And, once in a while, we've got a real unique character that demands more attention.

Now, Hello Neighbor is the kind of game that gives us all the willies.  Sneaking around the house of a mysterious neighbor who we're positive is up to something creepy?  Taking care to avoid the traps and find the strange dungeon that he's built in the basement?  Of course, if you and your kiddo are good enough, maybe he never even caught you!  Maybe y'all never learned about the reasons he's gone to such lengths to keep his secrets.  Maybe you have to know!

Step into the mind of the mysterious neighbor... or, rather, let your kiddo do so.  It might be the only way to truly stop the nightmarish threat that this unknowable guy has become.  Or, more likely, you'll all just have a great time dressing up like a spooky character!  Either way, the iconic yellow shirt and purple sweater vest will make a fun transformation into an infamous video game character.  The molded mask has the chubby face of the ne'er-do-well neighbor and the rubber-like gloves just scream suspicious.  Grab a shovel accessory and watch everyone's eyes widen in fear!

JUST KEEP 'EM AWAY FROM THE CELLAR

We're pretty sure that your kiddo is going to love acting out the strange behavior of the mysterious neighbor from the amazing stealth/horror video game.  Just make sure they don't get too excited about digging up the basement!