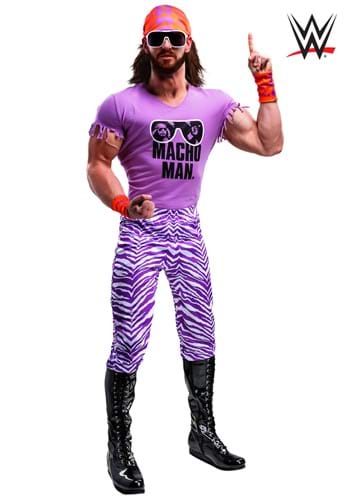 So, now that we’ve established who the best wrestler in all of WWE history is, we have an important question to ask you. Who are you going to dress up like when you’re trying to cosplay as a wrestler? The answer is obvious. You’re going to be Macho Man because it lets you be the showman you’ve always wanted to be. You get to wear bright pink and still be the manliest man in the room. You get to shout “Oh yeah!” at strangers and they’ll think that you’re awesome instead of weird. Sounds like a dream come true, doesn’t it?

This Macho Man Madness Costume is officially licensed from the WWE. It comes with the signature Macho Man shirt, along with a pair of matching pair of pink zebra pants. It also comes with wrist wraps, bandana, and sunglasses for a complete look that no one will be able to ignore. Of course, you’d better start growing your beard now if you want to look like the iconic wrestler!

So, we're not going to encourage you to make any rivalries while wearing this WWE Macho Man costume, but just know that you might get a few challenges to go into the ring. We think you should politely high five them and yell, "Oh, yeahhhhhhhh!" instead. Because Macho Man is a man of peace and enthusiasm, and not just about dominating in the ring.