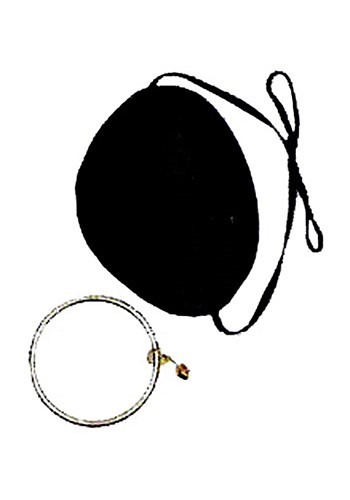 If you plan on conquering the seven seas and finding all the best loot in the world, there are a number of things that you have to do to get ready for the competition.  Remember, there might be a few rules that everyone follows on Pirate Island, but on the open sea, it is all fair game.  Now, if you’ve already got the pirate regalia down, you’re already almost all the way there.  We’re talking the full vest, scraggly hair, every shining ring, and, of course, your cutlass.  But, even with that, there is still a level of authenticity that you still need to finish to make sure the rest of those scurvy scum know not to tossle with you.

You need to show them that you’ve survived everything.  And, the most crucial bit for that is this Pirate Eye Patch and Earring set.  Now, we’re not saying that you need to go out and lose an eye in a rapier fight.  But, if you look like you survived such an ordeal, that’s going to have everyone thinking twice about a mutiny.  Just remember which eye you put it on.  Things will get really confusing if you swap things up in the middle of the evening.  Of course, then again, that might be just the tactic to use!  Convince them you’ve got a twin!  Bwahaha!