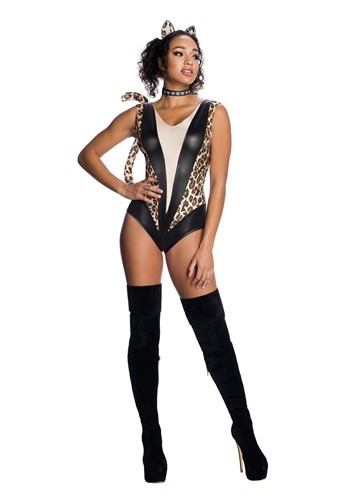 You've been hearing of their fame for years. The Pussycats could go far and (depending on which version of the story you're paying attention to) have already paved quite a trail. What has brought them such fame? Is it all thanks to the quirky fun of adding a cheapo pair of Halloween cat ears that Josie and her buddies became the hits of Riverdale and beyond? That seems possible but also just a bit far fetched. How about their everlasting friendship!?

Well, we thought that might have been what really kept things together, too, but those promises of a rocking solo career are pretty tough to ignore! Maybe it was the kitty ears after all!? Now that the Pussycats are yesterday's news, it's time for Josie to go on her own. The cat ears and pussycat costume are still totally her thing, right? No matter how much Veronica wants to slide her way into the spotlight, nobody can take that away from you, Josie!

Channel the fierce style of Josie with this deluxe costume. It is an officially licensed look straight out of Riverdale that includes a bodysuit style leotard designed to bring the hot look of leather and leopard print together. The attached tail evolves this kitty pride from the local spotlight to full feline fame. Of course, the cat ear headband and choker are a necessity to bring everything together. All you need next is the vocal stylings. If that isn't your style, a covert playlist on your phone and some lipsyncing skills will take you far!

Sometimes Josie heads the hit band of friends, the Pussycats. Other times, she's on her own for a solo career. Whichever route you want to take is sure to be filled with fun. Of course, teaming up with more cat-eared friends is always better!