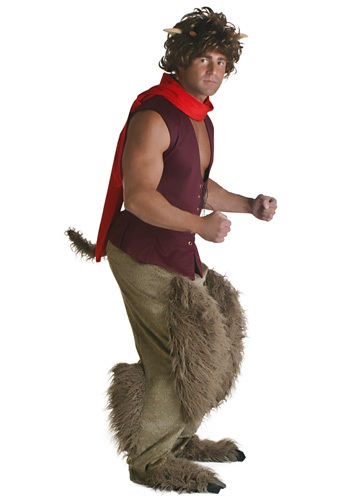 Sooner or later, everyone wonders what it would be like to have goat legs. The real question, though, is what you do when that time comes. We suggest slipping on our exclusive Satyr Costume, and seeing what having hooves and horns is really like!

You may already know what a satyr is, but for those of you that don't, they are the half-human, half-goat followers of Dionysus: the Ancient Greek god of wine making, epiphany, and all-around fun times in general. If Mount Olympus were a college campus, Dionysus would throw the best parties, and the satyrs would be his house band, as well as the guys bringing all of the refreshments! In Greek mythology, these party animals love their wine, playing instruments, and putting on theatrical displays, so it already makes the perfect costume to wear to a party! Plus, it'll give you plenty of insight into what it's like to have goat legs (which, we've been told, is a lot like having horse legs like a centaur, except it's much easier to walk down stairs).

We've designed these woolly costume pants to make you look like you have the hindquarters of a goat, even including hoofed shoe covers and an attached matching tail. It also includes a shaggy haired wig with little horns sticking out of it, to give you an easygoing party animal vibe. Just add a vest or scarf to complete your mythical look, and while you don't have to bring extra wine to share, it will probably make you pretty popular!