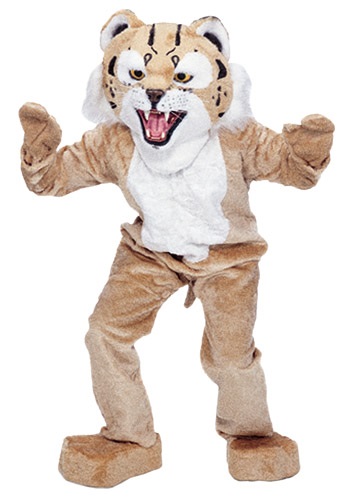 If your team is not already called the Wildcats, then it definitely should be! Oh…what is your team’s name? The Sloths! TRULY? Who do we need to talk about to get a team name change in motion? Think about it--pumas, lions, tigers, bobcats, cougars, ocelots--wild cats are the fiercest, fastest, and most fan-worthy animals in the kingdom!

We will be the first to cheer you on your new team representative, but we are guessing you won’t be far behind the trend. So when you want to root for your new wild team in style (or even if you just want a totally and fur-ociously cute Halloween costume) then this Wildcat Mascot Costume is made for you, friend! A sloth costume would also be cute, but not nearly as intimidating to opponents.

And speaking of your opponents, they will be running for cover and cowering in the shadows when they see you--after all, isn’t that what you would do if you saw a huge jungle cat prowling its way toward you? And that’s just what you look like in this ensemble...a big scary cat! But here is the best part: it’s as cozy as it is cautionary. You’ll be warm in the furry tan jumpsuit, but you’ll instill fear and fury with the oversized wildcat mascot head! So go ahead and become your team's ultimate super-fan when you wear this to the field, stadium, or even to a Halloween bash!