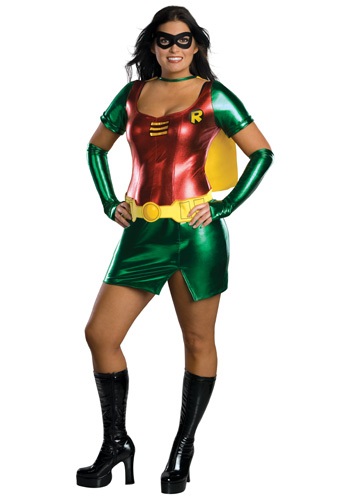 They're like the superhero version of peanut butter and jelly. Bacon and eggs. Peas in a pod. It's Batman and Robin.

Let's get real for a second here. Sure, Batman is the crusader of the night. Sure he can single-handedly take down crime bosses, smuggling rings, and psychotic bad guys. He's that good. He's amazingly smart, plus all those fancy tech toys (and the billions of dollars don't hurt either). He's a powerhouse for justice.

But just because Batman can take down all the baddies all alone doesn't mean he should. There's plenty of times the bat could use an extra hand, an extra pair of eyes, or at least someone there to lighten the mood. Enter Robin.

So if you're the type of hero that maybe needs a few more years of training. Or if you're quick and agile with a healthy serving of sass, you very well might be our next Robin. If so, you'll need the threads. Our Plus Size Robin costume is just what you need. It's shiny in Robin's signature green, yellow, and red, with a yellow cape and green wrist warmers. It even includes the mask, utility belt, and Robin patch attached. Sure, the Bat symbol may be shining, but where we come from? That means Batman and Robin.