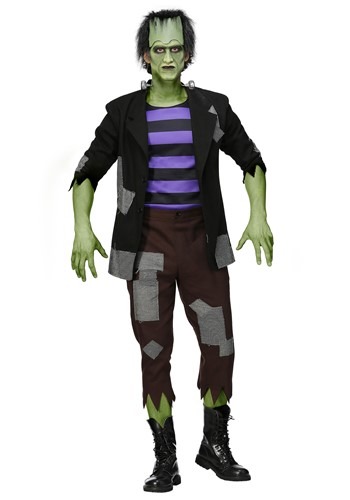 Mary Shelley's novel Frankenstein was a story about the dangers of science getting out of hand. We can see where she was coming from. Raising the dead back to life by quilting a bunch of people's bodies together seems like an experiment bound to go wrong. Just imagine that poor monster's body odor! He's also quite mumbly. The downside of having such a monstrous cohort has been explored again and again but have you ever thought of all the GOOD reason to have this goofy green giant around?

For one, it would be nice to have a friend that's willing to stand by you and make you look good at parties. You might have some crazy hair as a result of playing with electricity in the lab but in contrast with Frankie's green pallor and vast forehead, we're sure you'd look like some kind of Clooney character. Second of all, it's nice to have a strong, silent type in your social circle. As long as you aren't hanging out around a bonfire you and your pals would have someone to open tough jars, push cars out of snow drifts, and even change kegs! Pretty handy, if you ask us!

We give Doctor Frankenstein plenty of grief but in the end, we think this monster would be pretty nice to have around. This Halloween, you could clean up the green beast's rap sheet. With tattered, patched clothes, a purple striped t-shirt, neck bolts, and a shaggy green headpiece you're sure to shock the Halloween scene at first. But hey, those revelers have nothing on you. You've just come back from life, now that's a shock to remember!

Yes, it comes from a classic novel, but this Frankenstein's Monster costume is as relevant as ever. It explores the nature of humanity! And if you have anything to say about it, he knows that humans are at their best when they're partying.