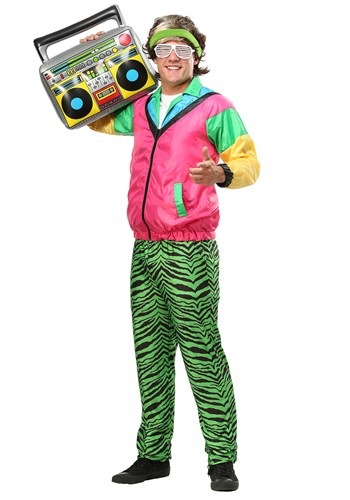 You know what's pretty amazing? That when we were in the 80s, we didn't realize that the 80s were kind of ridiculous. We mean, 80s style is really a testament to the power of denial and the gullibility of the human spirit. But we also LOVE the 80s with all of our heart, and we're guessing you do, too. The technology was cutting edge—portable cassette players and eventually disc players, cordless phones, even cell phones as big as your forearm—the music was on point, and the clothes...well, what can we say? The clothes were insane. But also cool (though insanely cool may be a stretch)! The point isn't what you looked like, back then, it was what you felt like. And you felt fly.

And here's the good news: the 80s are back! We've seen actual scrunchies being sold in stores (we kid you not). So re-usher in your favorite era in this Men's 80s Jock Costume. It's a clash of colors and patterns that could only be considered cool circa 1985, and it makes a hilarious and totally radical costume. And seeing how the 80s are coming back, this may even be a fun look to take out on a random Friday night...psych!

This exclusive costume features a jacket-pants-headband combo only possible in the 80s. The jacket zips and sports a gnarly neon color block pattern. Meanwhile, the pants are...memorable! They are green tiger striped (naturally) and have an elastic waistband, in case you need to get into a breakdance competition without warning. Somehow, the whole thing just works together. The terry cloth headband tops off your hair (hopefully a mullet) and makes you feel like a boss. Now, grab a real boombox and crank up some jams, or snag one of our inflatable models (they're a lot lighter to carry on your shoulder all night, and you can blast the music from your phone!)— because tonight is gonna be bomb diggity!

Who are you kidding? You cannot resist 80s style anymore now than you could then. Throw on some shades, homeboy, and lace-up a sweet pair of kicks, because there's no point in trying to pretend you're anything other than what you are: a child of the 80s. Maybe there will be a cute flygirl in the crowd tonight just looking for a sick guy like you!