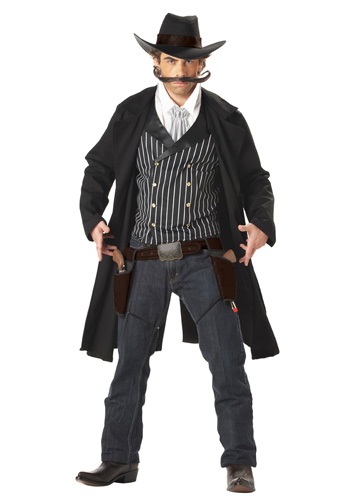 There's a new sheriff in town.

Those are never the words a gun fighter wants to hear. They traveled west because they didn’t want any interference from the law. They wanted to live their lives as men. Doing what they want, when they want. Robbing the occasional stagecoach to keep themselves in booze, and women.

You've always been fascinated by Billy the Kid, Wyatt Earp, and Jesse James. You liked men from both sides of the law. But only because they were gunslingers. The best of the best. They were fearless. Standing to face one another. Waiting for the count. Then whipping out their guns, and firing. Hoping that they were faster, they were luckier. They were alive.

This Halloween you can be the fastest gun in the west with this Adult Gunfighter Western Costume. You'll have to be on the look out, because we hear there is a new sheriff in town, and that always spells trouble for outlaws. But don't forget the threat of other gunslingers. There is always going to be some young buck who thinks they are faster than you. Who thinks they can take you out, claim your glory for their own. So, get ready to use those guns. You are going to need them. But living the way you want, free of the law, will be worth the time, and effort you will put in to become the greatest gunfighter in the West.