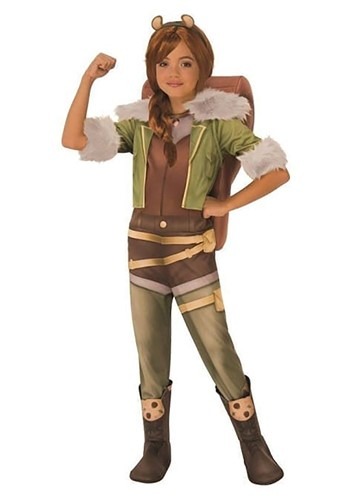 Do you know Squirrel Girl's impressive feats? Let's take a look at them! She defeated Doctor Doom all by herself. It took the entire Fantastic Four to do that. She stopped Thanos in his tracks, which is something that even The Avengers couldn't do. She even beat Galactus once. That's right! The one and only devourer of planets could not win a battle against the Unbeatable Squirrel Girl! She uses her wits and he squirrel-based powers to get the best of much stronger foes all the time.

Is your girl ready to outsmart her enemies? Is she ready to make the Avengers look like fools? Does she try to make friends with random squirrels in your neighborhood? (Are they still possibly growing into some of their teeth?) Well, then your child might just be ready to step into the role of the unbeatable mutant with this Child Squirrel Girl Costume.

This officially licensed Squirrel Girl Costume for kids is inspired by Squirrel Girl's outfit from the Marvel comic book series. The costume starts with a simple, full-body jumpsuit that has printed details to recreate the look of her outfit. It has printed belts, a printed jacket, and boot tops. It even has faux fur around the shoulders and sleeves. The tail fits with elastic shoulder straps and can be stuffed (with newspaper or foam) to achieve a full, squirrel-like quality. Finally, the headband finishes off the look! It fits with a simple plastic band and features foam, squirrel ears on top. Once your girl has the whole outfit on, she'll be ready to go a few rounds with even the toughest of supervillains.

Maybe it's time to infuse the Avengers with some new faces! If her track record is anything to take to heart, she might even be more powerful that Thor, Hulk, and Captain America combined!