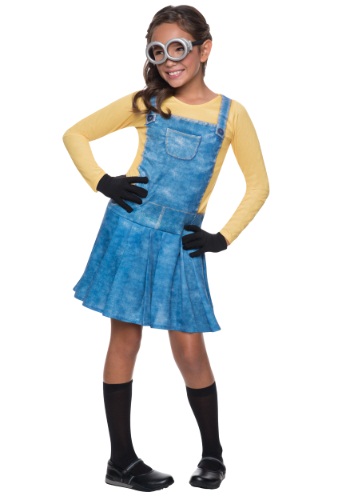 As much fun as being a criminal mastermind sounds, you have to start somewhere. There's no better way for your kid to kick off her career in world domination than dressing up in this official Minion Costume, and looking like she came right out of the smash hit Despicable Me and Minions movies!

No matter how well-planned a scheme is, a minion can't just put on an evil uniform, grab a laser cannon, and plot to take over the world on her very first day of work. She'll need to start at the bottom and work her way up through the evil ranks. After spending a while as a loyal minion, and then a short time as a second-in-command, she'll be ready to take her place among the masters of supervillainy! Her name could be on the same lists as the greatest evildoers in history, like Scarlet Overkill, Dr. Nefario, and even the infamous Gru. Or, who knows, maybe she'll discover that she's a fantastic minion and wants to keep doing that!

She can fine tune her supervillain plans while wearing this licensed costume! The ruffled dress looks just like the denim overalls worn by the goofy little yellow helpers from the movies, and a set of adjustable goggles give her the look of a professional evil lab assistant. She can even team up with her friends dressed up as minions, and together they can form their own supervillain team for trick-or-treating! Who needs a master, anyway?