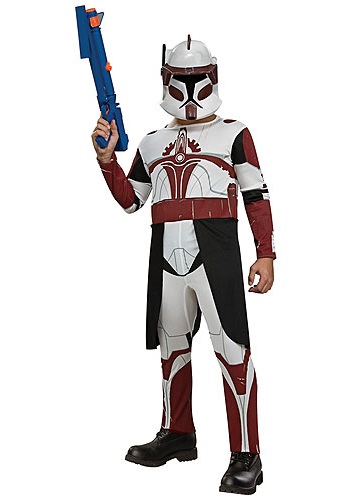 If you see the target, shoot to kill.

Commander Fox, or CC-1010 as he’s known by his friends, is the captain of the Coruscant Guard. When it’s your job to protect an evil emperor, you have to be the best. And Commander Fox puts the regular Stormtroopers to shame with his brilliant tactical mind and ability to actually hit what he’s shooting at.

Like all other soldiers in the clone army, Commander Fox is a clone of Jango Fett, Boba Fett’s father. Growing up with thousands of copies of yourself must be weird, but it has to have its upsides too. You can all share the same mittens in the winter. No one could make fun of the way you look. And Christmas shopping would probably be a breeze. How Fox came to be the best in an army of identical people beats us, but maybe that’s not the most unbelievable thing in the Star Wars universe.

With our Commander Fox costume, you might be a clone, but you’ll definitely stick out in a crowd. The jumpsuit has all of the commander’s armor’s details, but in one piece, so you won’t misplace a vital piece of the look. It includes a built-in kama, which a blast-resistant piece of armor that hangs from the belt specific to Star Wars. The mask fits securely with elastic. Bring the fight to the Jedi this Halloween!