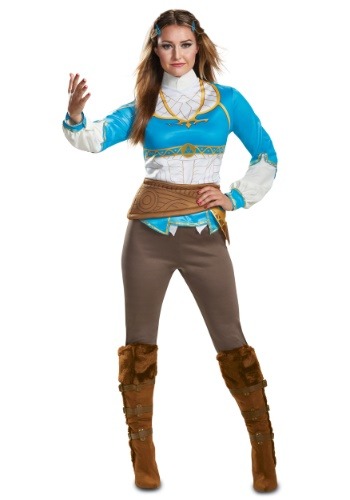 You’ve played Breath of the Wild, right? The threat of Ganon looms over Hyrule. His power is unimaginable. His hunger for destruction is insatiable. Surely, if he’s allowed to run loose on Hyrule, all will be lost. And what’s Link doing about it? He’s trying to track down some Goat Butter to give to Koko. After that, he’s out catching frogs for some Zora kids. It’s almost like he’s forgotten that Ganon is mere moments away from ushering in an age of darkness upon the land. It’s almost like he doesn’t even care about the fate of Hyrule one bit. It’s almost as if he’s just some lollygagging kid who wants to play around instead of saving the world!

Well, when you can’t trust a quiet good natured kid to get the job done, then that just means that it’s time for the real hero of Hyrule to do it. Yes, that means it’s time for Zelda to break out her light arrows for the final showdown with Ganon. She’s got the skills to take the baddie down without Link’s help. In fact, if you have the right attitude and the right outfit, you can do it too.

Now you can assume the role of Hyrule’s heroic princess with this Women’s Breath of the Wild. The top of the costume has bright blue print, along with gold accents. It also comes with a pair of light brown pants and a pair of faux suede boot-tops. When you put on the entire outfit, you might feel fit enough to handle Ganon without the help of that lollygagging Link!

Just wear this Legend of Zelda costume and you can become the savior that Hyrule deserves! Just be sure to bring the Master Sword and a Bow with you, since you’ll need both of those if you want to defeat evil once and for all.