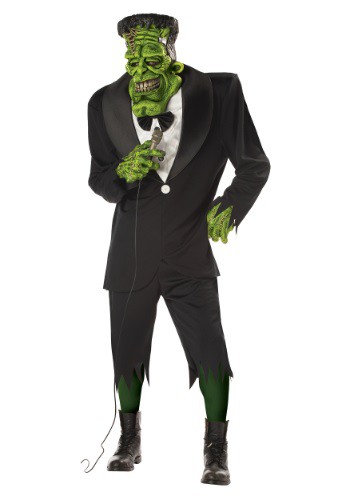 Beware, for I am fearless, and therefore powerful.

We all get a little green sometimes. It might be because we are envious. Or because we are not feeling 100%, kind of puke-y really. And sometimes we turn into a giant green rage monster, also known as the Hulk. But that rarely happens.

More often, we turn into the original green guy. No, not the Jolly Green Giant. No we turn into the reanimated monster. We turn into Frankenstein's monster, affectionately called Frank by our friends. Most folks now a days don’t chase us down with pitchforks, and torches. They seem to like us now, but maybe that is because we can do all the heavy lifting.

You can let Dr. Frankenstein put you into this Big Frank Costume, or you can just put it on yourself. Either way you are becoming Frank for Halloween this year. Dr. Frankenstein doesn’t really ask if he can make someone into a monster. But, you should have it much easier in the 21st century. Hardly anyone has pitchforks, and torches anymore, and that's if they even felt like you were a threat. Just stay the good kind of green in this Frank mask, because turning into a giant green rage monster, like the Hulk, isn't going to be winning you any popularity contests. But being the lovable Frank might. Well, at least no peasants will try to hunt you down! (Hopefully.)