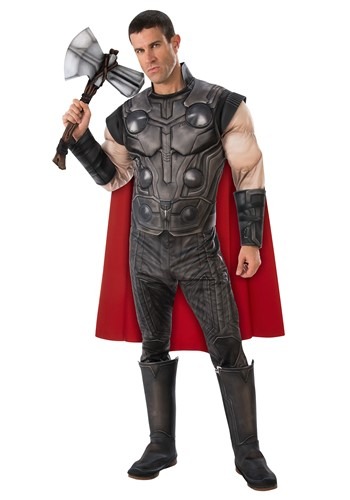 The Hammer of Justice

Thor doesn't like losing. If you think he's just going to let Thanos win... you've got another think coming! You'd better believe that he's going to pick up his hammer and swing it in the name of justice. Of course, he might take a little break in between to play some video games, have a few drinks, and hang with his intergalactic buds, but isn't that something we all need to do every once and a while? He's still going to drop that hammer on evil eventually!

Well, now you can swing the heavy hammer of justice too! You just need an officially licensed costume from Avengers: Endgame... and a healthy beard never hurts! Now, we can help you get geared up like an Asgardian superhero, but you might need to work on growing that beard for the final showdown with Thanos.

If you want to transform into the Asgardian hero, then look no further! This Avengers: Endgame Thor Costume is a deluxe costume from the Marvel Cinematic Universe and it's the best way to dress like your favorite superhero. The costume comes with a full jumpsuit that has printed details to recreate Thor's armor. It also has a muscle padded chest and arms to help give you a true Asgardian physique. The legs feature boot covers, which allow you to wear your favorite pair of shoes with the outfit and the bright red cape puts the finishing touch to the whole look!

If you're ready to wield the might of Asgard, then you'd better be wearing the right uniform! This Marvel Avengers: Endgame Costume will have you ready to bring the full might of justice down on Thanos... just remember to get yourself a mighty weapon to wield before you start picking any fights!