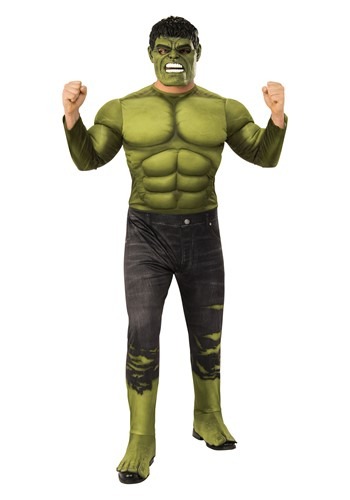 You know, in the old days it was different. There would have been an exclamation point hanging out at the end of that iconic phrase. These days, Hulk has a little bit of a different approach to life. He's not quite the uncontrollable monster he was back in the first Avengers movie. He's still big, green, and strong enough to throw a city bus into orbit... but he's started to get a bit more introspective. Instead of just smashing with complete abandon, he now stops to ponder about smashing.

Of course, he still smashes. That's what the Hulk does. He just thinks about it a little more in Avengers: Endgame! Now, you can be a slightly more thoughtful Hulk when you wear this officially licensed costume from the latest Marvel movie!

This Avengers: Endgame Incredible Hulk Costume helps you transform into the mean and green superhero from the movies. The costume comes with a green jumpsuit that has plenty of muscle padding in the chest and arms to help give you that hulked-out look. The legs have printed jeans on the bottom, complete with faux rips. The feet feature shoe covers, so you can wear your favorite pair of shoes while hulking it. Finally, the included mask completes your transformation by giving you the angry face of the big green lug. Once you have it on, you'll be ready to join the team for the big fight against Thanos!

Being the Hulk doesn't require you to spend hours in the lab studying gamma rays! You just need this officially licensed costume from Avengers: Endgame. Make sure to assemble your team if you plan on facing Thanos though! It's going to take a lot more than just the Hulk to take that big baddie down.