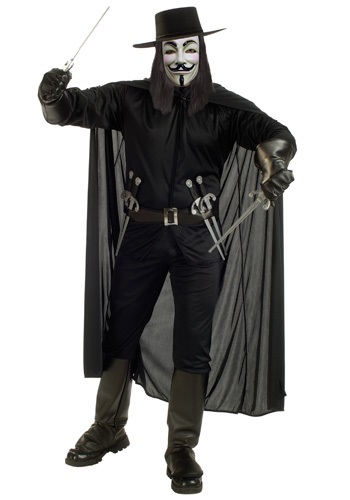 That's right, Guy Fawkes! America's favorite adopted patriot. Great Britain's favorite homegrown patriot. Forgot by many, except on the fifth of November, when he is remembered by all. Well... Okay, not all because most people still don't know who he is, but enough that you're looking at that costume saying "oh yeah, that guy." Of course, most people know him from V for Vendetta, which is where this costume is from. Or Anonymous, the internet hacking collective hidden behind many a Guy Fawkes mask. Have you felt out of the loop when it comes to rebellions, protests, and civil disobedience? Do you want to celebrate your love of wearing a cape without anyone knowing who you are? Then this is definitely the costume for you.

The V for Vendetta costume can be used in many situations. Without the mask, you have a dashing and dapper man in all black with a fetching hat to boot! With the mask but no outfit, you've got a mysterious figure who can cause all kinds of trouble with no one being any wiser (unless they figure it out based on your clothes, which is actually pretty likely). Put it all together and you have the ultimate symbol of the fight against an all-powerful, corrupt government. They will stop at nothing to silence you, but with this costume on, they'll never know who you are. "Beneath this mask there is more than flesh. Beneath this mask there is an idea, Mr. Creedy. And ideas are bulletproof." Quite right!