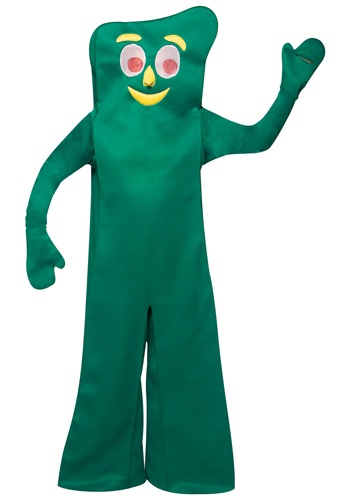 Have you seen the video that came out around this Halloween, where the guy dressed up as his dog's favorite chew toy, and his dog basically freaked the eff out? It was adorable! And did you know what that favorite dog toy was? Gumby!

Those of us who remember Gumby (yeah, you're right - we are old! That cat's been around since the '50s) were happy to see that magical green guy make a comeback. These days, there are admittedly some pretty rad cartoons out there, but sometimes we still kind of feel like none of them can compare to the ones we grew up with (doesn't everyone kind of feel like that, though?). So it's been kind of a bummer that most of the world has forgotten about the dude made out of clay who could jump into adventure simply by leaping into the page of his favorite book (and what about Pokey, his faithful friend? You deserved better, buddy!). After all, in our opinion, one of the best, most underrated things in life is being able to talk about and connect with other kids (now adults, FTR) who experienced the same cool childhood stuff that you did.

But with this Adult Gumby Costume, you have the chance to bring this classic character back to life and make him a part of the modern world again! Think of it as being part of his legacy....you will not let the world forget! Gumby's life will matter, because you stood as a witness to it! Also, you'll definitely be a huge hit with Baby Boomers, Generation X, and (according to the previously-referenced viral video) some dogs, which is also pretty great!