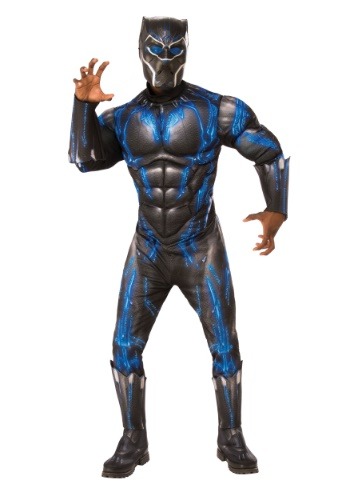 Well, you did it! You've passed your combat ceremony and you're now king, that's right, king of Wakanda! Well done, if we may say so. Of course, there are lots of things you've got to do now that you're king, but there's lots of time to take care of all that later. We think you should go straight to the coolest, and most exciting step. You know what we're talking about... stopping by Shuri's laboratory to see if she's got a new uniform ready for you. Luckily, she does!

And, guess what? We've got a version, too. This Adult Black Panther Costume! Of course, our version isn't quite as teched-out as the real Black Panther suit, but it's a darn close replica. In fact, it's so cool, it even has electric blue effects to depict stored up kinetic energy. You can feel just like Black Panther when you slip it on, all ready to blast Killmonger and any other bad guys. All we gotta do it get you suited up!

This Adult Deluxe Black Panther Blue Costume is officially licensed from Marvel Comics and the smash hit Black Panther movie. A polyester jumpsuit, it features foam padded muscle effects, and it's fully printed. Printed details include Wakanda symbols and designs, and those aforementioned blue streaks of energy. Like we said, this costume doesn't actually store energy, but it sure looks like it does! Complete the costume effect with the front face mask, and you too will be ready to patrol the streets as the Black Panther.

Fun from the movies

We love going to the movies as much as the next costume crew, and if you're anything like us, you're all about the action from the hit Marvel Cinematic Universe. You've seen the movies, so suiting up as your favorite character is the natural next step! Choose this Black Panther movie costume or any of our other Marvel costumes, and you're sure to have an action-packed time.