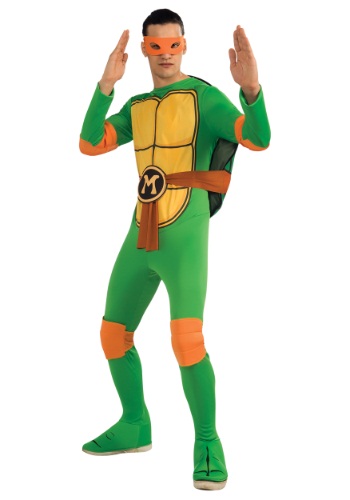 So you’re a real party dude who never met a pizza you didn’t like! You’re handy with the nunchucks, and some might even say that you’re also smooth with the ladies (actually, no one says that except you…but fake ‘til you make it, right?!).

And yeah, it’s not always easy being part of a pack of teenaged anthropomorphic turtles named after Renaissance Italian artists whose mission it is to keep the streets clean from crime while also attempting to stay hidden from society, but you’ve learned to make the most of it! When you live on the streets (or, more technically, below them, in the sewer system) in New York City, you tend to run into a lot of petty criminals, evil overlords, mutated creatures, and alien invaders. It just happens, and so you get into some stuff. Yet you always know just when it’s time wind down. After all, if you can’t live by the motto of “Fight hard, party hard”, then what’s the point of having even been created in a lab by a misunderstood scientist?

So when it’s time to fight some foes like Shredder and the Foot Clan, slip on this officially licensed Adult Classic TMNT Michelangelo Costume, which will easily carry you from battling on the dirty streets to partying down in the sewer. It even has Hook and Loop fastener tabs in the back, making it easy to slip out of at the end of a hard day or long, crazy night. And, if your shell accessory ties around the waist from too much fighting and not enough pizza consumption, just stuff them with newspaper and you'll be good to go until you have your next slice! Booyakasha, friend!