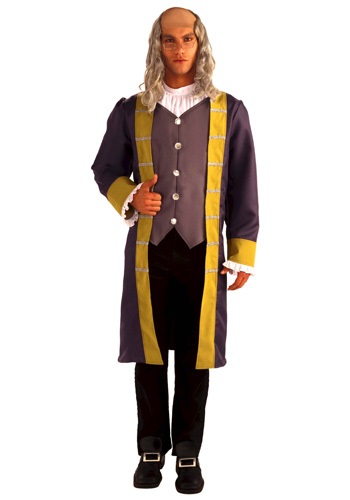 "But wherefore do not you a mightier way

And fortify your self in your decay

With means more blessed than my barren rhyme?"

We all want to be remembered for something. But that tyrant Time works constantly to erase the memory of our work and deeds. We remember only a large handful of people from the last few centuries, while we remember the names of only a spare few a thousand years prior. That sucks, doesn't it?

We don't mean to inspire in you any sort of existential dread. We only mean to inspire you to action! Like role-playing the part of one of the most prominent people and minds in the short history of the United States. A top, ever-influential diplomat, a sharp-witted writer and biographer, a dizzyingly productive inventor—Benjamin Franklin has so far fought that tyrant Time with valiance. (Not only did he invent the lightning rod and bifocals, but he also facilitated fire departments, libraries, newspapers, and universities!

What better way to forge your own timeless path than stepping into the coveted shoes of someone so accomplished? Now you can become Benjamin Franklin's doppelganger with this Adult Benjamin Franklin Costume. This costume is great for historical plays—or anything, really. The first time you wear it, ask if anyone has seen your ID in their wallet—and if you walk away $100 richer, let us know it worked.