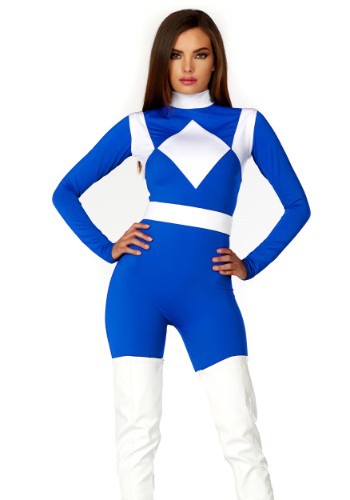 Alright, folks. We’ve got a team of five do-gooders who are ready to stop some freaky villains from ruining the Earth! Pick your favorite and let’s go!

… Okay, admittedly, that’s easier said than done. Not only did the ‘90s give us the “Team of Five Heroes” trend from everything from our favorite boy bands to the Saturday morning cartoons, but, that gave birth to a whole new line of debate: which color should you choose when starting your own hero team?

That question became really hard to answer, especially once you realize that green, white, or silver are all solid options! Fives are long gone, it seems, but you can still make a dominant stand and not only make a proud proclamation of your favorite color, but also take on the identity! Because, if we’ve learned anything about the heroes, it is that we’re not done needing them!

So, stand proudly in this Dominance Blue Catsuit costume. Historically, we might have seen the blue laughed off the stage as comic relief or as the third hero in the group of five. But, times have changed. The gals rule the blue, now, and they do so with brains and a fierce confidence that leaves the enemies of the planet running for their lives. The jumpsuit has the expected bright appliqués of blue and the iconic white diamond and the white belt fastens with Hook and Loop fastener in the back. You can have the lengthy blue leggings or you can pick up a high knee set of white boots to go with the full image and get ready to kick the ever living crap out of the baddies!