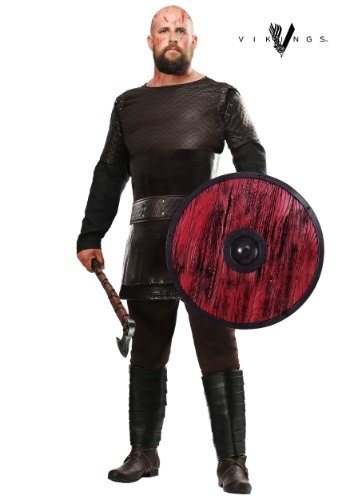 Do you consider yourself a Vikings fan? C'mon, don't be shy. We're positive you've been watching the hit History Channel series since it first debuted, which means you know all about Ragnar Lothbrok and his adventures on the show. He became an Earl, a King, and a battle-hardened warrior in his travels!

You might have never thought you'd get the chance to be a legendary Viking, and while we're not exactly encouraging you to hop into a Viking longboat and go raid your neighboring country, we do have a way to be a Viking that we're pretty enthusiastic about. Just get into this Ragnar Lothbrok costume! You'll be just like the legendary figure, and you'll have his style from the TV show dialed in just right.

You'll have a screen replica look when you pick out this Vikings Ragnar Lothbrok Plus Size Men's Costume. And that's because we teamed up with History Channel to make this authentic style. Yup, you're hearing us correctly, this costume is made and designed by us, and it's officially licensed!

Available exclusively here, this look includes everything you need to step into the role of the protagonist of Vikings.  It comes with a tunic, pants, belt, and a pair of boot tops. The embossed tunic and matching belt each look like worn leather. The pants have an elastic waist for easy wear and the boot covers are designed to look like leather plates!

In plus size 2X, this costume will have you ready for costume fun, but some faux weapons will have you looking ready for a battle. The shield and axe we have this costume pictured with are sold separately, but they're Vikings officially licensed, too. Pick up those accessories and style your hair just right, and you'll have a screen worthy look ready to go!