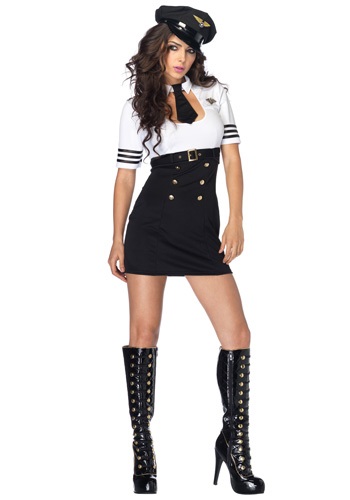 “This is your captain speaking…”

Who hasn’t dreamed of being able to fly? Wouldn’t it be neat to slide behind the controls in a cockpit and weave through the clouds? Plus, everyone thinks pilots are sexy, especially with their sharp uniforms and professional caps.

But becoming the captain of a 75-ton aircraft can be way more difficult than most people realize. There’s flight school and flight hours and countless tests before you ever earn your license. You need to know the difference between the control yoke and the yaw, the difference between pitch and roll, what the heck ailerons are… That’s not even getting into secondary controls like trim tabs and variable sweep wings. And that’s not even factoring in things like wind speed and vectors.

What we’re saying is—flying isn’t nearly as easy as it may look. But while it takes a lot of effort to become a real pilot, it’s still really easy to look like a real pilot with this Sexy Pilot First Class Captain Costume. In fact, other than enrolling in flight school, this is the next best thing to make your dream of becoming a pilot a reality. The top portion of the dress is white with a plunging neckline, along with official-looking black epaulets on the shoulders, an attached black tie and a black name tag that reads “Capt. Friendly Sky.” The bottom portion is black and is cinched at the waist with a decorative cloth belt and gold metal buckle, while two rows of decorative gold eagle buttons cascade down the front. It also comes with a jaunty pilot hat with a yellow wing symbol on top. Thanks to this outfit, you’ll look right at home in any cockpit.

Buckle up and get ready for takeoff in this Sexy Pilot First Class Captain Costume!